We Would Love To Introduce

Dr. Jeff Wilhoit is a native of Johnson City, Tennessee, where he attended East Tennessee State University. Upon completion he moved to Marietta, Georgia where he graduated from Life Chiropractic College. He began his career in Kingsport and then relocated to the Maryville area in 1990, where he opened Village Chiropractic Center.  In 2006, after outgrowing the space there, they moved to Alcoa, Tennessee, and changed the name to Alcoa Chiropractic Center because of the new location.  He started treating patients in February, 1981, and has been practicing chiropractic care for 40 years! Dr. Wilhoit is so thankful that God allowed him to help so many people, while having fun doing it! Outside of the office Dr. Wilhoit enjoys shooting, and being on his farm in Greenback, where he loves riding several of his grandchildren around the farm while they pretend to go on great adventures with "Poppy".  Dr. Wilhoit looks forward to reading his Bible and having prayer time each day with his wife Pat. He enjoys feeding and watching the birds, as well as hearing them sing along with other critters that show up.

Favorite Verse: I press toward the mark for the prize of the high calling of God in Christ Jesus.- Philippians 3:14 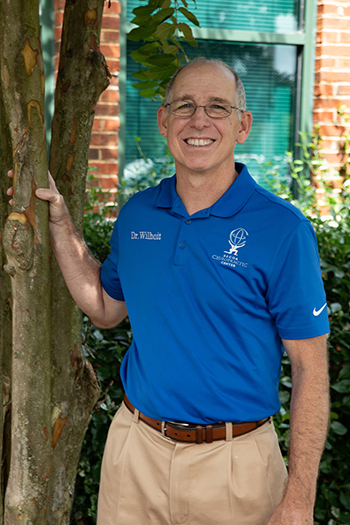